I thought I would move away from the relentless pace of tourney reports (I only have one more before I am caught up) and share some thoughts on chaff tactics in the evolving meta.

These musings started when I read a thread on the Da Warpath that Goblin Wolf Rider units were now useless.  This statement was made with the introduction of Wood Elves and the increase in BS based shooting.  With HE, DE, and now WE, BS based shooting has come roaring back into the meta.  The comments I read is that wolf riders are now just free points.

I believe strongly that wolf riders and fast cav in general are an important element of the game.  Much of what I talk about with fast cav can be used with other forms of chaff but I decided to focus on fast cav in particular since it was thinking about Wolf Riders that started this whole post!

I came across a Battle Report recently that I thought I would use as a case study (HE MSU v Cav Prince).  This is one of Sword Masters reports on Ulthuan Forum.  If you do not read Sword Master’s Bat reps, you should.  He is a master at MSU, which is a style of play I love (Hinge’s Ramblings #2).

This game interested me in that both sides had Fast cav, used them a bit differently and will work well in illustrating my thoughts.  Look over the deployment and vanguards.  My understanding were that the Reavers were some of the earliest drops.

I think starting with a review of the most common roles of Fast Cav would be useful (Hinge's Ramblins #3)..


Before I go any further, I have to acknowledge and recommend KillerK's thread on the Druchii forum regarding some great fast cav tactics.  In fact, if you have not read, read it now, I can wait.

All I can say is the post is brilliant, I have used all those tactics at least once, and they work.

So lets look over the deployment up above.

ER 1-  I suspect an early drop to draw out Sword Master.  However, the unit used its vanguard to move forward.  This is the single biggest mistake I see opposing players make.  I give you Hinge's Fast Cav rule #1.

ER 1 was vangaurded (?) forward into the combined fire power of Sisters, Reavers, and Seaguard. Needless to say it was shot off to no gain.  It would have been better to vanguard behind the hill, where it then could either be used to protect RBTs or spend a couple turns moving to the other flank.

Another problem I see is the idea that the unit could be used as a Decoy Drop.  The drop count was 9 to 14, giving the MSU army an advantage in deployment.  I do think it is a good unit to lead with, but rather it should have been deployed in the middle.  This way it could vanguard to either flank once Darth determined which he would push.  (Hinge's Ramblings #5)

ER2-This unit was likely deployed in a similar manner as ER1.  However it had a great target to go after, Sword Master's RBT.  The problem here is it used its vanguard to move right into the combined fire power of that RBT, another Reaver unit and an Archer unit.  Its chance of actually reaching that RBT was very slim. See rule #1.

Instead, he should have moved the unit behind the White Lions to gain hardcover.  This would have given him a unit to counter Sword Master's ER1.  I also ask you, what Darth could have done if he had a Reaver unit alive on turn 2 or 3 near the White Lions (Hinge's Ramblings #6).  This also leads to Hinge's Fast Cav rule #2.

Often times it is better to sit on Fast cav.  You may want to wait until they drop their warmachines so you can be in the best position.  Or perhaps you are so out deployed, you might as well deploy your main units then deploy the Fast cav in the best place to interfere with your opponents reactions.

In this case, Darth could have waited until he decided where his Schwerpunkt was going to be, then deployed the second fast cav unit.

I also ask, if ER 1 had deployed center then joined that flank with vanguard, would not the combined efforts of both Reaver units going after the RBT increase the odds of success?

Lets look at Sword Master's use of Fast Cav.

ER1- Sword Master opted not to vanguard.  This gave him the option to charge the opposing Reavers. Personally I feel he should have forgone that option and moved the fast cav behind the archers.  However, I feel Sword Master did an excellent job of moving this unit after.  He used it to march block, limit the wheel of the Cav bus, and got it into a tough place for opposing shooting to find it, all while advancing to the enemy rear, where he would get a flank charge onto some archers. He was even in a position to race back if Darth had pushed harder on turn 2.

ER 2 - Sword Master also did not vanguard this unit.  This was an interesting choice but it seems he decided to use the Reavers as a shield to protect the more valuable Dragon Princes.  A role I had not listed above, mobile hard cover!  However, the tactic comes with risk, as the destruction of the Reavers would cause panic tests.  Sword Master certainly is aware of this and had his BSB close by.  If you follow the report, the Reaver unit would dance around with the opposing Reaver to no real effect.  The opposing Reaver unit was not in a threatening position, I feel Sword Master should have advanced ER 2 with the Dragon Princes on the RBTs or moved back center to help distract the bus.  The opposing Reaver unit could easily be dealt with by shooting.

The lesson to draw from this Bat Rep when faced with a strong BS shooting phase are: 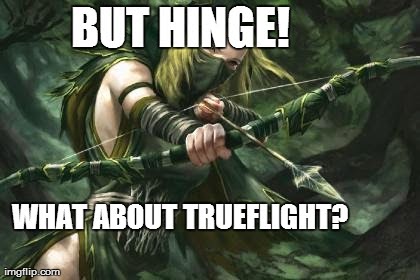 Trueflight does not invalidate any of the comments I have made.  Woodies will bring more high quality ST 3 shots then any other army, but the basic tactics in keeping your fast cav alive remain.  Yes, hiding the fast cav becomes more difficult.  This actually may mean that the last point above is more important, deploy them last so they can keep the range open from the shooting.  LOS blocking terrain can be used. Also realize it takes 22 Trueflight shots to kill a 5 man wolf rider unit!  That is the effort of 330 points (more likely 450) to kill a single 60 point unit.  In the mean time what is the rest of your army doing?  What else is he not killing, like warmachines! Also, it only takes 1 wolf rider to redirect a Wild Rider unit, therefore he must kill it to a man before it stops being useful.  In this match, keeping the wolfs close to home is important.  More capable Fast cav means they are worth shooting at, however, pressure can be put on those woodies as often time they can take on those small Glade Guard units.  Finally, sending one unit very wide and behind cover to get behind the Woodies is worth the effort so you can punish double flees.

I do not view the rise of BS based armies as the death of Fast cav, but rather a challenge to evolve tactics to deal with them.  Fast cav are far to useful to leave home.

I will be doing a little Bragging next post.

Hinge's Ramblings #1
Don't worry right wingers, I had a Nancy Pelosi meme lined up.  In the end I decided to keep politics out of a Warhammer blog.

Hinge's Ramblings #2
MSU stands for Multiple Small Units.  It is a concept that gives up fewer larger but more powerful and durable units for more but smaller and fragile units.  The style is fairly unforgiving in play but puts a premium on generalship and the movement phase.

Hinge's Ramblings #3
There are several roles I am leaving out that are becoming common.  These are combat units in there own right, combat character delivery, and a wizard bunker.  Dark Riders, Warlocks, Sisters of the Thorn, and Wild Riders are all commonly used in these roles. Why I did not include them in the above, though they can all perform in those roles as well, is their cost starts to increase as unit sizes get bigger and characters are included.  They move out of the realm of chaff at that point.

Hinge's Ramblings #5
I beat up Darth a bit on the Fast cav but his overloading a flank deployment was fundamentally sound and gave him a real good shot of winning the game.

I suggest Darth could have used his Fast cav to set this situation if he had protected the unit from first turn shooting by turn 2, turn 3 latest.  This would have forced Sword Master to expend resources to protect his elite units.  Also note the Frost Heart was also nearby as well, not to mention an eagle.  If the ER 1 unit had set up center, Darth could have repeated and Sword Master would not have had an answer.
Posted by Hinge at 10:07 PM

Hinge
Oakland, CA
I enjoy playing Tournament Warhammer and drinking beer. I prefer to do both at the same time!